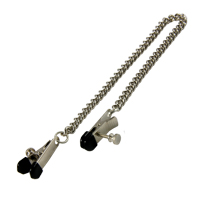 Men have nipples, too.  And we fully enjoy having them tweaked, squeezed, pinched, licked, sucked, and bitten just as much as women do. Wouldn't it be nice to have a custom-made device (like the Delightful Clamps, left) to keep the pressure on the nipple/aureola area while freeing up your eager hands and mouth for other wicked pursuits?

Thus were nipple clips or clamps, aka titclamps, invented. Sure you can use clothespins, but they tend to grip too hard and who wants to hazard splinters from the wooden variety or cuts from the sharp teeth of the plastic type? Alligator clips from Radio Shack? Let's not even go there. Chip clips have been known to be employed in a pinch, but they're big and ungainly and look really silly. And neither clothespins nor chip clips come connected by an attractive chain that's just right for grabbing in order to apply a gentle tug or twist, or to lead your victim — I mean your partner — on a little walkabout.

A friend shared his experience from the night before (we hope we were the inspiration for this!)  A buddy stopped by for some intimate play.

The Gift of Nipple Clamps

It all started when I hugged my partner and and was rewarded with a wince.  (Never a good sign.)  Nipple clamps fell out from under the sweatshirt!  Now I understood.  I have been a fan of nipple play for a long time.  In fact, after I started to play with my nips they seemed to come alive--they became more sensitive and quickly became a major erogenous zone.  The same thing happened to my partner.  A new toy helped us discover a brand new toy!  (One that we both enjoy!)

Nipple clamps  is all about finding your sexual bliss!  Nipple clamps (and throw in some clothes pins) and a vibrator--you can catch this incredible sexual buzz--and ENJOY

So why not use the proper tool designed specifically for the job?

As you'll be constricting (and maybe even temporarily halting) blood flow to the clamped area, it's a good idea not to leave the clamps on for more than 10 to 15 minutes at a time. There's another compelling reason to limit duration—they hurt way more coming off than going on. The feeling of blood returning and nerves springing back in the compressed region is quite memorable. Or, as subjects have been known to exclaim upon clamp removal: "Ahhh...errr...arRR...OOOWWWWW!" This fact leads to the Nipple Clamp Dilemma: you know they're going to hurt coming off, so you delay removal, but the longer you delay, the more it's going to hurt. Did I say "hurt"? I meant to say "produce a powerful sensation centering you in the moment."

Start by clamping as much flesh as possible. Then you can experiment by gradually grabbing less, which concentrates the pressure and the sensation. Be careful not to nip only the very end of the nipple, which could cause more severe sensation than you intend, not to mention risk tearing the tissue.

Try the clamps on different body parts. The male genitals provide a wealth of sensitive sites suitable for squeezing between the clamps' jaws. Or try the lips, the tongue, the earlobes, the underarms...

Some factors to consider when deciding which model to try:
Is the force adjustable, i.e. can the clamps be adjusted to pinch harder or softer?
Are they designed to fit around a prominent, protruding small-diameter target (better suited to a tiny small erect nipples) or are they capable of grabbing a good chunk of less prominent nipple and surrounding flesh (better suited to the big male anatomy)?


A breakthrough of technical ingenuity applied to getting you off—and what nobler goal could there be? At first glance, these clamps appear to be one of the standard versions—alligator-type with an adjusting screw limiting how tightly they bite—with attached cylindrical weights. But push the button control, and they start to hum, adding a compelling vibratory stimulus to the already constricted nipple that elevates the nipple clamping experience into the realm of the unforgettable.


Versatile is the word for the Nipplettes. Robert immediately discovered a dual-use for these as a mini-vibrator without clamping, when the barrel section is applied directly to the area under his balls near his ass. The maximum setting is plenty strong enough for this toy to serve double duty in your small cache of essential travel companions.


A further bonus is the highly amusing warning/disclaimer sheet in the package. You'll have minutes of fun trying to figure out the reason for the inscrutable advice: "This product is not intended for use as a contraceptive/birth control." And how about "stop using if pain occurs" and "misuse may result in swelling of the nipples"?  Isn't that the whole point?

Why wear a Cock Ring?!
Do you ever wonder why guys wear a cock ring?

Here's one reason:  a HUGE package!  I've never been a package-watcher but this one would certainly catch my eye!  Achieve this impressive bulge with the hefty Cock Ring available in brushed or mirrored finish.  It has great heft so you know you are being cradled and there are no hard edges.  It achieves a natural profile that will certainly get you noticed!  It feels great under jeans, leathers, a dress suit  best under a jock strap or nothing at all!