Both of the judges are also Black.  Judge Gayles becomes the first openly Black openly gay man to serve on the federal judiciary.

Judge Yandle was confirmed by a party-line 52-44 vote. She was nominated in January and becomes the first Black judge "ever on that court and the first openly gay judge in the 7th Circuit, which covers Illinois, Indiana and Wisconsin," noted Politico.

Judge Yandle has served as a solo practitioner focusing on civil litigation in southern Illinois since 2007, according to a biography provided by the White House. The judge follows the path of the distinguished Judge Deborah Batts, the groundbreaking Black lesbian jurist whom President Bill Clinton nominated to the Southern District of New York in 1994. Batts became the first ever openly LGBT federal judge.

National Black Justice Coalition CEO Sharon Lettman-Hicks applauded the historic confirmations."I am thrilled that the Senate has confirmed Attorney Yandle and Judge Gayles to the federal bench. NBJC celebrates both confirmations that will inspire so many in the Black and LGBT communities," said Lettman-Hicks. "In addition, we celebrate the vast life experiences that they will take with them to the federal bench as they work to render impartial decisions. It's a significant sign of progress in our nation when two individuals are judged solely on their merits when being considered for these important lifetime appointments."

This is not the first time that Obama has nominated a Black openly gay man to the federal judiciary. In November 2012, Obama nominated William Thomas to the U.S. District Court for the Southern District of Florida.  Florida Republican Sen. Marco Rubio initially recommended Thomas but later stalled the nomination. Thomas' nomination was not resubmitted this year. 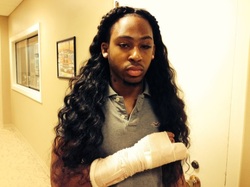 VIRAL VIDEO REITERATES HATE CRIMES BLACK GAY MEN FACE – EVEN AT PRIDE For Christin Howard, attending Detroit Motor City Pride didn’t give him a sense of pride or even security. The event ended in a brutal attack on Howard by five to eight individuals. Yesterday, the video…

Why I am boycotting Barneys, and you should too!

This may be the defining HIV issue of our time, and it is a true test of our
compassion and understanding of both HIV stigma and the law.  Please read this  closely.