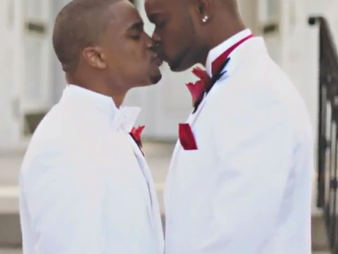 Tthe wedding video of Robert Brown and Nathanael Gay (who
is a member of the historically black fraternity, Kappa Alpha Psi) is "going
viral and racking up spirited conversations across social networks."
Unfortunately, the comments aren't all congratulatory, with some taking personal offense that a member of the organization would exercise his right to marry in  -- God forbid -- a ceremony incorporating the fraternity's colors. One Clutch reader, for example, weighed in with this comment:


Here is my problem with the Wedding…. It was a Gay KAPPA wedding. A Gay
wedding is perfectly fine. But a Gay Kappa Wedding? They pulled an ENTIRE
HISTORICAL, MEN’S FRATERNITY in to their gay
wedding/lifestyle."

Well, no. Robert and Nathanael actually didn't pull anyone into anything, and
no one was harmed. If you're really concerned about the well-being of large
groups of people of color, there are so many -- so many -- more
important issues in this country about which to rant in all caps. Without going
into all of those, we'd like to gently suggest that anyone who's outraged rather
than touched by the video (watch it above) should consider pledging Hater Phi
Homophobe.